Personal blog and other stuff

I wish you all a happy New Year 2010! Admittedly with some delay, but I had to recover from the new years party and the related stresses and strains.

This year, we (my girlfriend and me) went to Berlin - to visit a good friend who lives there. And who provided us with a place to stay at.

The journey to Berlin by car on the 30th was relatively nasty because it was raining all along and we had poor visibility. About 80 km outside of Berlin it began to snow - and it did not stop until we left on the 1st of January. Thus, Berlin was covered by a lot of snow, which - admittedly - looked really nice. I have never seen such masses of snow in Stuttgart. 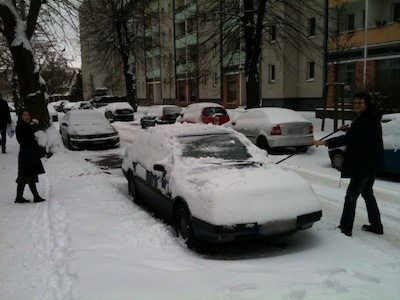 On the 31st, we went to the chaussee of the enthusiasts (Chaussee der Enthusiasten) in the RAW-temple. The show finished at about 11pm, and we really enjoyed it. Whoever comes to visit Berlin (or those who live there), and who likes amusement, should definitely try it out. We laughed a lot and even bough a book with an included audio CD of it.

After the show we headed to the Brandenburg gate but we couldn't reach it in time. So we celebrated new years eve in front of the pleasure garden (Lustgarten), which was also pretty cool. It was not as packed as it was near the Brandenburg gate, and we were able to comfortably watch the fireworks.

Later we took the train back to Schöneweide. Unfortunately, it broke down on its way. And as we didn't want to wait for another train to come, we tramped back home through the snow. The rest of the night we spend at a new years party at a bar in Schöneweide, called Fosca.

Summarized we had a great new years eve. And I hope, you all had a similar good start into the new decade!

Leave a comment, if you want to!
Marked fields (*) are mandatory.